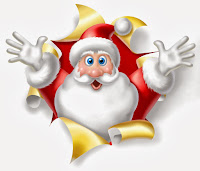 Merry Christmas! This crazy time of year has, strangely, brought me back to writing because I realized what threw off my mojo. I shelved a book before I was finished and started another one. That was a message to myself that what I wrote didn't matter. I'd stopped writing for me and started writing for the market. I realized this a few months ago, but still couldn't get back on the horse. I think this is because I lost any sense of urgency to get anything done. I'd lost hope.

Well, I have slapped myself back to writing and thank goodness for that. It really is a part of me and when I'm not creating, I'm in a slump. Writing is the source of my magic.

Magic plays a big part in our house around Christmas. Yes, Jesus or Saturn or Odin is the reason for the season (we go with Jesus even though I completely get the roots of the Winter Solstice celebrations -- I think the meaning the celebrants impart into the celebration gives it authenticity). But we also have Santa. Call him a marketing figure created by Coke or creepy stalker who watches you sleep, I don't care. He's magic and when kids believe in him, their sense of wonderment and optimism is contagious. It abolishes all the skepticism, depression, and stress that comes with the season. Because Santa is watching. And Christmas morning when there are things under the tree, it's proof that faith is rewarded. Santa is more than a carrot on a stick, he's potential and limitless possibility -- something we grow out of way too soon.

My oldest is eleven and in the sixth grade. She informed me she no longer believes, but she was waiting for me to confirm or deny. I left it in the air and made a joke about Santa bringing kids that didn't believe in him socks for Christmas. She's still going to go to be too excited to sleep on Christmas Eve and her heart will race when she finds her stocking. She's on the edge of the age of not believing and I want her to hold on because there is a joy that comes with belief in magic.

As for me, I think I must hold on to some innate belief in order to keep plodding forward with faith that someday I'll write the right book. Either that, or I'm insane (reminiscent of Jonathan Strange and Mr. Norrell where only the insane could see magic). Either way, I just entered the Golden Heart contest. Again.

I hope I never reach the age of not believing.

Good for you on entering the Golden Heart. I hope you do well. I never finaled, but then I only entered once. I became ineligible after that. Which is a GOOD thing! Hope it happens for you!

Yes, it's a good thing to be ineligible. :) I read Ghostly Liaisons, btw and left you a review on Amazon.
Thanks for continuing to check on me!

I saw the review--thank you! By the way, that's the book I entered into the Golden Heart.

Bedknobs and Broomsticks, such a great way to explain.

I loved Bedknobs and Broomsticks when I was a kid! I remember seeing it at the theater and thinking a flying bed was the coolest thing ever. Fingers crossed you do well in the Golden Hearts. I used to enter those...back in the 90s. Never even came close!